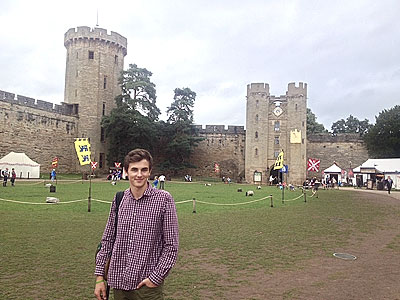 The knowledge of Enlgish for a student from the Faculty of International Relations of BSU is a priority. For me, as an international lawyer, it plays even a bigger role than work experience. During my first year of University I set myself the goal to learn it, and the best way to do that is to live where everyone speaks it. Every year thousands of students travel to Great Britain, and I became one of them. In my journey I found a whole bunch of  speech practice, lots of cultural recreational activities, and met some kind people from England, Spain and China. But let’s go step by step.

May 2014: choosing an English school and an intermediary company

Belarus has many companies that organize these kinds of travels. After a long search I settled with the Educational Ceter “Leader”. It’s the biggest center in the country and it’s been on the market for several years. Since in those kind of travels reliability is the main priority. Besides, I have studied English there and it has been a satisfactory experience. In “Leader” they offered me different types of language schools, and I chose “The Heart of English Language School”, located in the resort town of Royal Leamington Spa, 2 hours away from London. It’s the center of England, and it has many landmarks near it. Honestly, small British towns have their own charm, you can meet a lot of kind people there and relax in a quiet place. The price was also acceptable: 225 pounds for a week of lessons, plus 130 pounds to live with a family.

I prepared all the documents in the Educational Center and then applied for the visa. For that I had to fill and online form and to pay a visa fee of 144 USD. After filling the documents the site suggests you to sign up for an appointment to submit the documents. Keep in mind that you have to submit the documents at least 4 weeks before your travel, since the visa is issued in Moscow (which takes 14 days), and time is needed for the documents to go to Moscow and to come back. All the information needed to receive the visa will be provided by Leader. In addition, their staff is always avaliable and they will solve any questions and doubts that you may have. I think there shouldn’t be any problems here.

I traveled to the UK by plane with the “Belavia” airline. It’s not the cheapest way, but the direct flight from Minsk is very convenient. A one way ticket costs 230 euros, but the price may vary depending of the time of the year. A cheaper alternative would be flights from Vilnus or Kaunas. Buy your tickets as soon as possible, since the price usually skyrockets a few days before the flight. The plane took off at 12:10pm and flight lasted for 3 hours. But because of the time time difference we landed in London at 13:10. From the Gatwick airport I traveled in bus to the town I lived in (the cheapest and quickest option). I was met by my family at the bus station. There hasn’t been any issues with my family, they were extremely kind people. A 14-year-old boy from Spain lived with me in the family.

On monday I went to my first class. I was instantly assigned a class, since even before coming to England I already made a test to determine my English level that the Educational Center sent me. Everyone had more or less the same level (Intermediate). At first, our group had 6 students, but on the next day one of us was transfered to a more advanced group. So, have no worries if the test didn’t establish your level with total accuracy. This way only 5 of us remained (in this school 6 is the biggest amount of students in a group). My group had 2 girls, 1 boy from Spain, and a Chinese student.

In the courses we studied every day for 4 academic hours. The lessons were focused on developing our oral speech skills, that is why learned a lot of vocabulary, developed our listening skills, and spoke about different topics in English. A few lessons were dedicated to grammar, reading and phonetics. Our teacher was just amazing: she gave us lots of interesting materials, explained everything in a very clear manner, and always helped us. After the courses I significantly increased my vocabulary, my fear of speaking english vanished, and my speech became more fluent.

During those two weeks i did more than studying :)). I became friends with the Spanish guys and we spent a lot of time together after the classes. We visited the famous Warwick castle, Shakespeare’s hometown Stratforf-upon-Avon, and the Oxford’s university campus. Also I went to London on my own. The capital struck me with majestic buildings and a huge number of people, but at the same time London remains open and accessible. I visited the British Museum, Buckingham Palace, walked around Westminster Abbey, the government quarter, drove around the city on double-decker buses, visited King’s Cross and all the main attractions. I just didn’t have time to visit the Olympic Stadium.

Oxford amazed me even more than London: a special ancient city with a large number of colleges, each of which is unique in its own way. The small and large courtyards of the castles where the colleges are located are fascinating, immediately there is a desire to study in such a stunningly beautiful place.

Stratford-upon-Avon, in comparison to London, is a small town with small wooden houses and absolutely charming churches. Millions of admirers of William Shakespeare’s works visit this place, since this is where the English genius was born and where he grew up. By the way, this year (2014) they celebrated 450 years from the birth of the greatest English poet and playwright. It is very difficult to describe one’s impressions about the country, it’s something you need to experience by yourself! By the way, when you go to UK don’t forget to visit a pub, specially during the night/evening. There is something unique about it’s atmosphere, and it’s a fabulous way to get some speech practice.

Despite the fact that such courses are not cheap, I highly recomment everybody to try such an unforgettable journey. In addition to tons of speech practice, you will make lots of friends from other countries, immerse yourself in the English culture, and get some memories that you won’t ever forget. I assure you, this experience will change the way you see the world. So don’t think twice and try it yourself. And I am always happy to help you with any questions you may have.